Jay, it would be very helpful to have your timezone appear with embedded dates.

At the moment I see this: 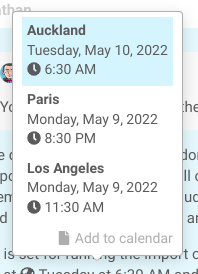 This was fine when you were in Reno, but less good for Florida!

Hmm. I’m not quite sure where you see that, even with the screen shot, but I added “America/Chicago” which is where I think that I’ll mostly live (both my “vacation home” and the one that I think we will be renting in another few months are here in US-CDT), so maybe that’ll help.

I can’t remember if you can see my presence or I’ve turned it off somewhere that non-admins can’t see it.

If I drop a date into a post, which is a very handy way of trying to co-ordinate things like talking to you.


This is what I see on your user card (not much):

I added a bio!

Was the time that you just added supposed to be yesterday? There was a bug in that timezone stuff recently that may still not be fixed (or maybe it’ll get fixed when I upgrade later today).

It would look a bit nicer without the “am who” I reckon. But otherwise sweet!

would look a bit nicer without the “am who”

Got another ‘little tweak’. Your avatar flair (which I really like) would look a lot nicer with a transparent background I reckon.

It looks a bit like a New Zealand bird called a Kokako: 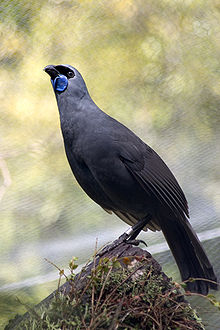 Kōkako /ˈkɔːkəkoʊ/ (Callaeas) are two species of endangered forest birds which are endemic to New Zealand, the North Island kōkako (Callaeas wilsoni) and the presumably extinct South Island kōkako (Callaeas cinereus). They are both slate-grey with wattles and have black masks. They belong to a genus containing five known species of New Zealand wattlebird, the other three being two species of tieke (saddleback) and the extinct huia. Previously widespread, kōkako populati The spelling kokako (wit...

Your avatar flair (which I really like) would look a lot nicer with a transparent background I reckon.

Yes! This has been on my list for a while now.

It looks a bit like a New Zealand bird called a Kokako:

Here’s one in my (now former) yard: